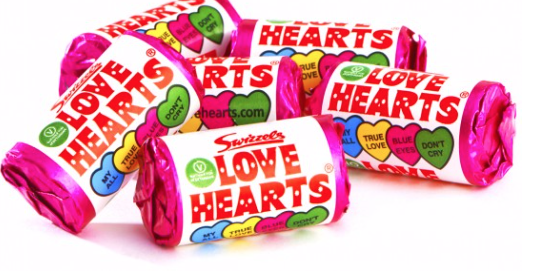 Love Hearts are made by the confectionery manufacturer Swizzels Matlow Ltd and are a staple of English confectionary.

Production of Love Hearts began in 1954, 26 years after the formation of Swizzels Ltd. The company was initially in factory premises at Star Lane, Canning Town, London, moving later that year to the larger premises at Drivers Avenue, Plaistow, London. During the Blitz in 1940 production relocated to a disused textile mill in New Mills, Derbyshire, where it has stayed to this day.

Love hearts were initially made for Christmas crackers but became so popular that it was decided they would be part of an ongoing line for Swizzels, and in the 1980’s, love hearts went international. Love Hearts have always been a British staple! They have had many royal visits to their factory and even produced limited edition celebration packs to commemorate royal visits and birthdays. It was after this that Love Hearts started to experiment mainly throughout the 90’s with limited edition sweets for Mothers Day and Valentines Day.

We’ve been shortlisted for the #NorthernDevAward

WARNING: Elves at work. Thank you everyone for yo

'Twas some weeks before Christmas, on grand Newton

Shooting video as part of our marketing consultanc

Keeping up to date with the latest tips and trends

We have the best clients! Thanks to Bryn at @aldri

Our Head of Marketing Seb spent the day with our w